skip to main | skip to sidebar

Looking for a particular song? Search this blog here:

Of The Father's Love Begotten 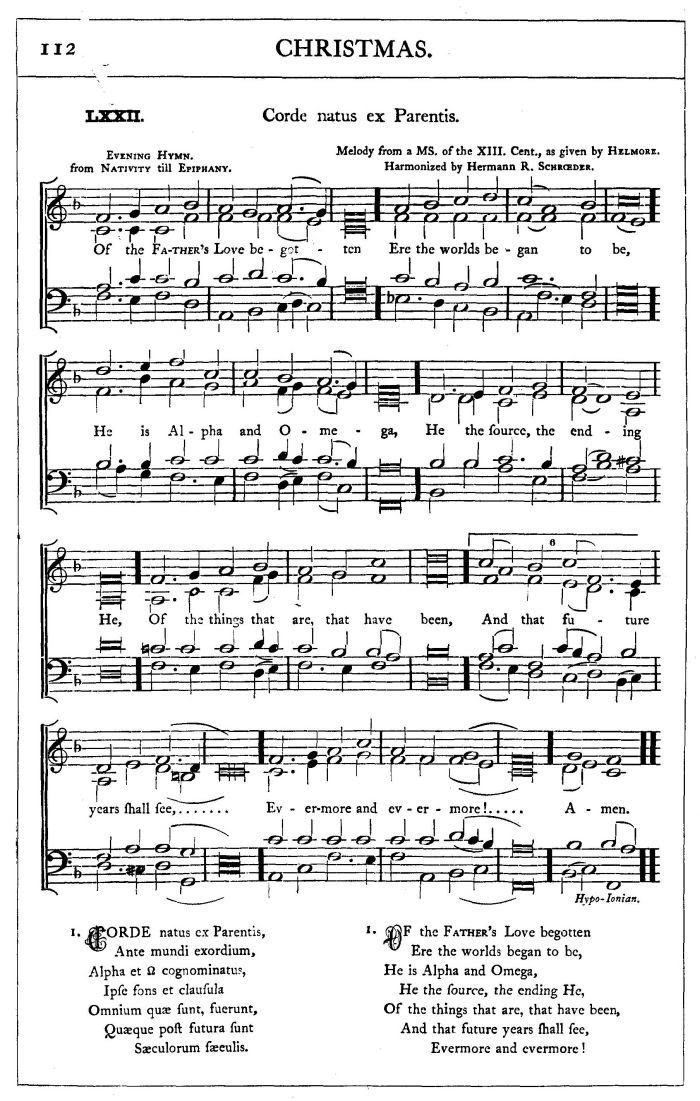 Of the Father's love begotten,
ere the worlds began to be,
he is Alpha and Omega,
he the source, the ending he,
of the things that are, that have been,
and that future years shall see,
evermore and evermore!

At his word the words were framèd;
he commanded; it was done:
heaven and earth and depths of ocean
in their threefold order one;
all that grows beneath the shining
of the moon and burning sun,
evermore and evermore!

O that birth for ever blessèd,
when the Virgin, full of grace,
by the Holy Ghost conceiving,
bare the Saviour of our race;
and the Babe, the world's Redeemer,
first revealed his sacred face,
evermore and evermore!

This is he whom seers in old time
chanted of with one accord;
whom the voices of the prophets
promised in their faithful word;
now he shines, the long expected,
let creation praise its Lord,
evermore and evermore!

O ye heights of heaven, adore him;
angel-hosts, his praises sing;
powers, dominions, bow before him,
and extol our God and King;
let no tongue on earth be silent,
every voice in concert ring,
evermore and evermore!

Christ, to thee with God the Father,
and, O Holy Ghost, to thee,
hymn and chant and high thanksgiving,
and unwearied praises be;
honor, glory and dominion,
and eternal victory,
evermore and evermore!

Cantus Mundi is maintained by